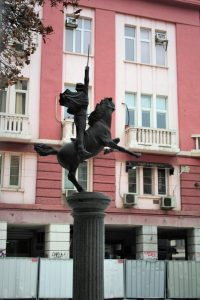 The reason not to categorise this sculpture as a statue is the lack of monumentality.