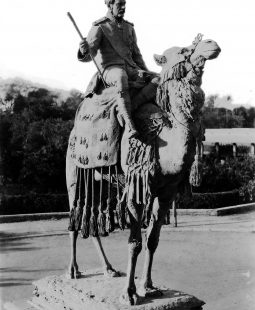 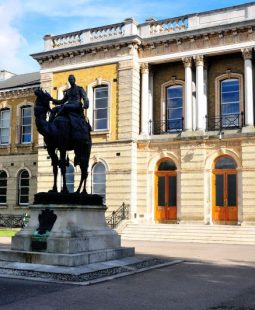 This sculpture was commissioned by the Corps of Royal Engineers, whose original specification was for a statue of General Gordon on foot in the uniform of an Egyptian General, but the sculptor considered it more appropriate for him to be mounted on a camel. To this end he made studies at London Zoo. The first casting was exhibited at the Royal Academy in 1890 and then erected in Brompton Barracks near Chatham, Kent.

A second casting was produced in 1902, shipped to Sudan and erected in Khartoum in 1903. Originally on a low plinth, Lord Kitchener ordered the statue to be placed on a much higher plinth to appear more impressive. The statue remained in Khartoum until 1958, but, rejected by the Sudanese Government after independence, it was presented after its return to the UK to Gordon’s School in Woking and it has been situated there since 1959 at the edge of Gordon’s School playing fields.

This sculpture does not qualify as a statue as the rider is not sitting on a horse but on a camel.