Home | Muhammad Ali of Egypt and the Sudan 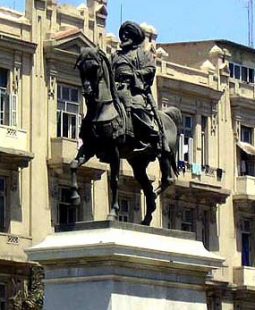 Upon completion the statue was exhibited at the Champs Elysees before being shipped to Egypt. Four lions, originally meant to stand guard by the statue of Mohammed Ali, but fattened and lengthened by two metres , were placed at the opposite entrances of a bridge over the River Nile in Cairo in 1873