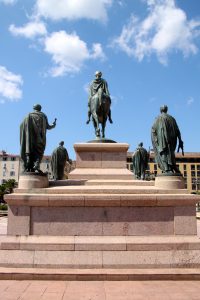 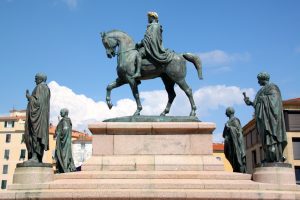 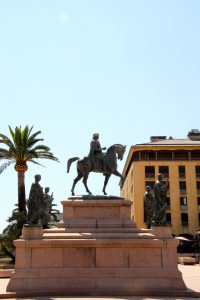 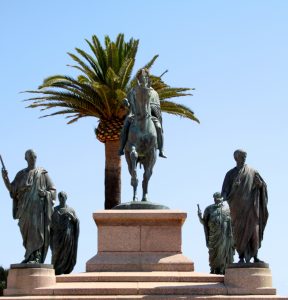 In August of 1854, the General Council of Ajaccio decided to commission a monument to Napoleon and his four brothers. And so in 1862 a committee was formed to gather the necessary funds through public underwriting. The committee was presided over in Paris by Prince Jérôme Napoleon and the first underwriters were the ministers of Napoleon III.

The design of the monument was commissioned from Eugene Viollet–Le–Duc and six sculptors were employed to carry out the work: Antoine–Louis Barye made the equestrian statue of Napoleon I, the plaster model for which is in the Musée d’Orsay; Aimé Millet that of Joseph; Gabriel–Jules Thomas that of Lucien; Jean–Claude Petit that of Louis and Jacques–Léonard Maillet that of Jérôme. Gabriel–Vital Dubray made two grey granite exedrae topped by Winged Victory. Napoleon was represented in triumph, his head crowned with a laurel wreath, the chlamys at his shoulder and in his right hand a globe topped by a small figure of Victory: the whole a perfect illustration of the idea of Caesar the conqueror and victor.

The monument was officially inaugurated in 1865 and faced toward the sea on the precise instructions of Viollet–Le–Duc. In 1969, on the occasion of the bicentennial of Napoleon’s birth, it was moved and faced toward the city. At this time, the Winged Victories and semi–circular benches were moved to the Place d’Austerlitz.